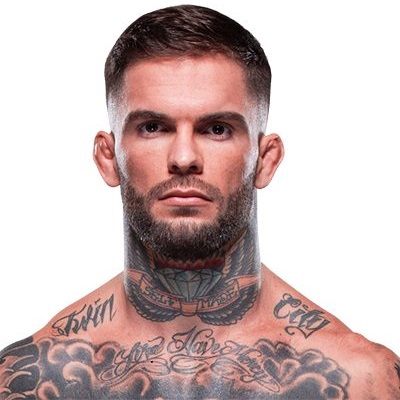 Your body is made up of something like 60 percent water. So if you're constantly draining yourself and dehydrating yourself in your training sessions, you constantly have to be on top of drinking enough water to rehydrate.

You can give me top boxers, Adrien Broner, Mikey Garcia. I would love to get in the ring with them.

You've got to have a short memory in this game, and move forward. Pick yourself up after a loss, and check yourself after a win.

What is the relationship of Cody Garbrandt?

Cody Garbrandt is married to his long-term girlfriend, Danny Pimsanguan. Her wife is a model by profession.

They met each other during the MMA promotion Pinnacle FC and started dating each other. Later, on the 29th of July 2017, they got married to each another.

In March 2018, the couple was blessed with a son, Kai Fisher Garbrandt.

Who is Cody Garbrandt?

Cody Garbrandt is a professional mixed martial artist for UFC. He is renowned as the UFC bantamweight champion and former Pinnacle FC fighter.

Currently, he is ranked in the 3rd position in UFC bantamweight rankings.

Cody Garbrandt was born on the 7th of July 1991 in Uhrichsville, Ohio. His birth name is Cody Ray Allen Garbrandt and has British-Irish ethnicity.

His parents were separated when he was just one year. The main reason behind divorce happens to domestic violence. After that, he was raised by his mother, Jessica along with his younger brother, Zach.

Whereas his father spent most of his life in prison. Also, he happens to be a drug addict too.

When he was four years, he started to train for boxing along with his brother. At the time, they were trained by their uncle, Robert Meese who happens to be an Olympic alternate in boxing. When he became 10 years, his stepfather adopted him as a son.

Talking about his educational background, he graduated from Claymont High School in his hometown. At the time, he was popular in wrestling and football. In 2007, he won the state championship by defeating Zach Neibert. Also, he was honored with All-State Honors as a linebacker.

After high school, he attended two colleges; Newberry College and Notre Dame College. However, he dropped out of college due to academic reasons. Later, he started working as a bouncer, weed seller, and coal miner too.

After some time, he decided to commit his career to Mixed Martial Art.

In 2012, Cody Garbrandt debuted as a professional mixed martial artist. However, his first bout as an amateur fighter took place in 2009. By the time, he debuted, he has already made a record of 6 – 2.

In October 2014, he signed with the UFC. After that, on the 3rd of July 2015, he made his promotional debut at UFC 182 against Marcu Clyde Brimage. He won the match via TKO. On the 11th of July 2015, he fought against Henry Briones at UFC 189 via unanimous decision.

Moving forward, on the 21st of 2016, he fought against John Lineker at UFC Fight Night 83. He won the first round via TKO. On the 20th of August of the year, he fought Takeya Mizugaki at UFC 202.

The same year, he reached his career peak when drafted then Bantamweight Champion Dominick Cruz at UFC 207 via unanimous decision.

In January 2017, he became one of the coaches of The Ultimate Fighter 25. On the 4th of Movember 2017, he faced T.J Dillashaw. First, the match was postponed due to his back injury. He lost the match via knockout. Again, he fought Dillashaw in a rematch where he loses the match via TKO.

The match was first scheduled on the 28th of March which was postponed due to his kidney problem.

As of 2022, he has an estimated net worth of $2 million. As a mixed-martial artist, his earnings are in the range of $60k or above.

Apart from that, he also earns through his merchandise too.

In recent days, the mixed-martial artist is in the headlines as he is intending to win the title in multiple weight classes. As of now, he is busy dropping his weight to 125 pounds. Next, he will be challenging the new 125-pound champion, Deiveson Figueiredo.

Cody Garbrandt has black eyes with black hair. His height is 5 feet 7 inches and weighs around 62 kg.

He is truly passionate about tattoos too. Some of his body tattoos include TRUE LOVE on his knuckles which signifies his passion for fighting, WINGS, and DIAMOND on his neck, and BLESSED with WINGS on his stomach.

You may also read the bio of Paige, Michelle McCool, and Simone Alexandra.