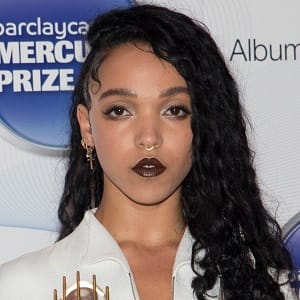 On astrology: "The stars are an alphabet to a whole language we haven't even discovered yet."

When asked how old she is: "In human years, I am like 28. But how old are we really? We don't even know. In time that humans have set, which isn't real, I'm 28. But like how old am I? You don't know how old you are. Your son could be older than you. What are we talking about? Human years? Soul years? Creative years? Years of what? That's how I see things. I don't know how old I am. I can't say."

FKA Twigs was previously in a relationship with actor Robert Pattinson. The pair began dating in July 2014. Later, they got engaged in March 2015.

They were together for two years and eventually, they ended their relationship in August 2017. She was also associated with Reuben Esser.

At present, she is dating a guy named Matt Healy.

Who is FKA Twigs?

Barnett was born in Cheltenham, the United Kingdom on January 16, 1988, as Tahliah Debrett Barnett. Currently, she is 33 years old. She was raised by her mother and stepfather.

Throughout her childhood years, she grew up in Gloucestershire. She became interested in the world of music from an early age. She is of English nationality.

Furthermore, she belongs to a mixed ethnic background Mixed (African-Jamaican, English, and Spanish).

FKA Twigs moved to South London to pursue a career as a dancer when she was 17 years old. Next, she began working as a backup dancer for artists including Dionne Bromfield, Jessie J, Kylie Minogue, Plan B, Taio Cruz, and Ed Sheeran among others. Eventually, Barnett started releasing her own songs and music videos.

Barnett released her debut studio album, ‘LP1’ in August 2014. The album was a success and it received critical acclaim. In addition, the album peaked at number 16 on the UK Albums Chart and number 30 on the US Billboard 200. Additionally, she also released the ‘M3LL155X’ EP in 2015.

Furthermore, apart from her work in music, Barnett has also worked as director and co-director for most of her videos.

Barnett has not revealed her current salary. However, she has an estimated net worth of around $4 million at present.

Barnett became part of a controversy after her controversial ad for Nike that featured unconventional imagery. At present, there are no rumors concerning her life and career.

Talking about her body measurement, FKA Twigs has a height of 5 feet 3 inches (1.6 m). Additionally, she weighs around 51 kg or 112½ pounds.

In addition, she has over 1.8M followers on Instagram. Similarly, her Facebook page has more than 380k followers.