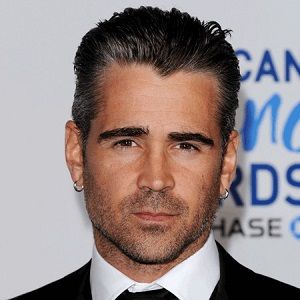 I couldn't care less about who sees my bits... My friends asked how I could do scenes like that and not get excited, but it wasn't like that. My bits looked the size of a cashew nut!

I find it the most tedious waste of life. It's so boring. I'd prefer to be sitting in a pub with a few strangers talkin' shit than looking at myself in the mirror runnin' on the treadmill.

Colin Farrell is currently single but he has several past affairs.

He started going with actress Amelia Warner by the end of 2000. After dating for almost five months, they sort of got married. Actually, the young couple was holidaying in Tahiti and impulsively one day, decided to hold an intimate wedding ceremony on the beach. However, the wedding wasn’t legally binding and it was good for them as they separated some months after the impromptu wedding.

Farrell met famously bisexual actress Michelle Rodriguez in 2002 during the shooting of the movie S.W.A.T. Apparently, one day after the shooting, they headed out for drinks and started dating henceforth. However, they decided to break-up some months after the release of the movie.

Colin started going out with model Kim Bordenave in January 2002. In 2003, she gave birth to a son, James in Los Angeles. Farrell hooked up with actress Angelina Jolie in 2003 during the shooting of historical drama, Alexander (2004). But they break up before the release of the movie.

Colin was spotted on many dates with singer Britney Spears in Los Angles in January 2003. He was dating actress and Playboy model, Nicole Narain, but they broke up. Colin had a brief fling with actress Lindsay Lohan in January 2004, with model and actress Carmen Electra, with actress Lake Bell in March 2006.

Moreover, Farrell started going out with medical student Muireann McDonnell after having met her at a bar in Dublin. Colin started dating journalist and novelist Emma Forrest. Farrell met Polish actress Alicja Bachleda while working in the 2009 movie, Ondine. In October 2009, Alicja gave birth to a boy. Their relationship ended in mid-2010.

Who is Colin Farrell?

Colin Farrell is a popular Irish actor. Farrell was inspired to take up acting after watching the classic Spielberg film, E.T. It was on his brother’s insistence that he joined a drama school and began learning the nuances of acting.

Colin Farrell was born in Castleknock, Dublin, Ireland on May 31, 1976. His birth name is Colin James Farrell and he is currently 43 years old. His father’s name is Eamon Farrell who ran a health food shop and was also a football player, who played for the team ‘Rovers’ and his mother’s name is Rita Farrell.

Talking about Colin’s education history, he began his schooling in St. Brigid’s National School and finished secondary schooling from Castleknock College. Then, he went to Gormanston College, a co-educational, Catholic school located in Gormanston Castle, Dublin.

Talking about her profession, an inspiration to choose acting as a career came after he watched the Hollywood sci-fi film, E.T., the Extra-Terrestrial. His debut feature film was ‘The War Zone’, and thereafter he acted in a movie called ‘Ordinary Decent Criminal’. In the year 2000, he acted in the movie ‘Tigerland’ after which his career graph spiraled northwards. Along with this, his next ‘Hart’s War’ with co-star Bruce Willis, was also a flop at the box office.

His role as a young member of the justice department became popular and got him critical acclaim, as well. In the year 2003 was an important one for Farrell, as he got roles with prominent actors and directors. ‘The Recruit’, ‘Daredevil’ and ‘S.W.A.T’ were movies that did really well and shot Farrell to fame. In the year 2003, he also acted in the Irish film, ‘Intermission’ which had a black comedy theme.

In the year 2004 landed him the title role of the epic film, ‘Alexander’, directed by Oliver Stone. During 2005, he acted in yet another historical film, ‘The New World’, as explorer John Smith, alongside Christopher Plummer and Christian Bale.

Though it did not do very well at the box office, it was acclaimed for stunning cinematography. In the next two years, he acted in several films like ‘Miami Vice’, ‘Ask the Dust’ and ‘Cassandra Dreams’. Though the first two did not receive many accolades, Woody Allen’s ‘Cassandra Dreams’ got mixed reviews from critics.

‘In Bruges’, released in 2008, was a great success. In the year 2009, he donned a small role of a street singer in the film ‘Crazy Heart’. He even sang a few soundtracks for this film – a new venture for this actor. The next two years saw the actor opposite co-stars like Keira Knightley, in ‘London Boulevard’, and comedy film ‘Horrible Bosses’ with Jennifer Aniston.

During 2012, he appeared with Kate Beckinsale, in the remake of ‘Total Recall’, a sci-fi film about a sleeper agent. Compared with the original’s actor, Arnold Schwarzenegger, Farrell emerged the better one in various scenes of the film. On the same year, he appeared as a creative writer Marty, in the black comedy, ‘Seven Psychopaths’, directed by Martin McDonagh.

He won Best Performance by an Actor in a Motion Picture – Comedy or Musical for In Bruges (2008), Best Ensemble Cast for Seven Psychopaths (2012), Best Actor for Tigerland (2000) at BSFC Award. Likewise, he won Best International Actor for The Lobster (2015), Fantastic Beasts and Where to Find Them (2016), Solace (2015) at Golden Camera.

He has an estimated net worth of around $30 million (as per 2019 data) and he has earned salaries up to $10,000,000 for his acting. This actor has given many movies which are commercially superhit. His acting skills have helped him to earn massive net worth and fame.

There was a rumor that Colin Farrell secretly dated Angelina Jolie. Currently, he is far from rumors and controversies.

Also, read the affair, salary, the net worth, controversy, and the bio of Liam Cunningham, Cillian Murphy, Kristian Nairn