Johannah Duggar is a media personality.

Johannah is living her single life as of now. She may be more concerned about starting her career as of now.

Although Johannah was rumored to be dating Carver Bowers. But it turns out to be false as Carver denied it and stated that they were just friends. 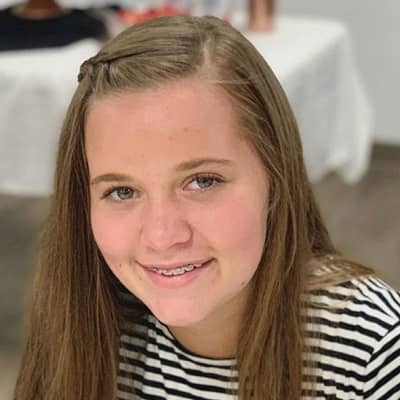 Who is Johannah Duggar?

Johannah Duggar is a media personality. She is popular for being the sixteenth child and also the sixth daughter of Jim Bob and Michelle Duggar’s nineteen children.

Johannah was born at 6:30 am on October 11, 2005. Her birthplace is Rogers, Arkansas, USA. Likewise, Johannah’s birth was filmed by the Discovery Health Channel camera crew.

Her parents are Jim Bob Duggar and Michelle Ruark. His father is a popular American real estate agent, politician, and television personality.

Likewise, she was homeschooled and must have received a good education.

Johannah is part of the limelight for their family’s show, 19 Kids and Counting. It is a reality/documentary series about the Duggar Family on TLC. It started on September 29, 2008, and has had ten seasons.

Talking about Johannah, she is a spirited child and often compared to her oldest sister, Jana.

By the time Johannah was born, her parents had implemented a buddy system. It says that an older child was paired with a younger child and has to take care of him/her. The tasks include dressing, bathing, and also feeding their younger siblings. Johannah was on a team with her older siblings Jinger and Jedidiah.

Furthermore, The Duggar family has their own website and post various family vlogs and news there. Johannah hasn’t started her career as of now. She is interested in playing volleyball and sketching/drawing via her family website.

Johannah has played various roles in her sibling’s wedding. She was a flower girl at her brother Josh’s wedding to Anna Keller in 2008 and likely at her cousin Amy’s wedding to Dillon King in 2015.

Moreover, she also was a flower girl at her parents Jim Bob and Michelle’s vow renewal ceremony in 2009.

She became the bridesmaid at her sister Jill, Jessa, Jinger, Joy, and also her brother Joseph’s weddings.

Johannah hasn’t started her own career and still studying. So she doesn’t earn on her own.

The Duggar family has accumulated a net worth of around $3.5 million. Growing up in such a renowned family, she must have a good lifestyle.

There were various rumors about Johannah dating Carver Bowers. The rumors came after they were seen pictured together.

But the rumor was denied by Carver and it was made clear that they are just good friends. They had celebrated Christmas and New Year’s Eve with her family.

Likewise, he also mentioned that he has someone else than Johannah. Click here for more details.

Johannah seems to have an average height and weight as per her age. But its measurement is unknown.

She has beautiful dark hazel eyes with light brown hair.

Johannah doesn’t seem to have her own official account on various social media platforms. Yet she has various fanmade accounts with over 700 followers.

They launched their Youtube channel on March 16, 2015, and have over 34K subscribers as of now. Furthermore, The Duggar family has its own website also.